What is the difference between Lowrance Hook and Hook2?

The cycle has taken another turn, Lowrance Hook2 replaces Lowrance Hook. And as always, we see many questions on the new units. Is Hook2 better than Hook? What is different from Hook? In this article we will look at the differences between Hook and Hook2.

Hook2 had its official press release in Amsterdam in November 2017. We were present at the release, and got to play around with the new units. Keep in mind that we have not tested them out on the water yet. This article will look at the theoretical differences, but from a practical point of view.
Before we look at Hook2, we will quickly look at the hierarchy of Lowrance: They have three different levels of units, where Hook2 is the entry-level units. Mid-level is Elite Ti and high-end is the HDS-series. With those three clearly defined levels of units, Lowrance can tune them specifically towards certain customers. This strategy is more clear than ever with Hook2, it is tailored towards the first-time user or the user that does not want to spend hours reading manuals. (Most likely, the typical Hooked2-customer will not read this article either.)

And here is perhaps the difference between Hook and Hook2 that will be most noticeable out on the water. While Hook was based on older high-end models like LCX, but without network and with simplified menus, the new Hook2 is designed from the bottom and up as entry-level.

The units themselves have changed. All sizes are now widescreen, and have the Exit-button we (and others) have been missing in previous entry-level units from Lowrance.
Something as simple as button-configuration might sound like a detail. But out there, on the water and in your boat, this is actually quite important for the interface. Well-planned button-configuration makes for easy use, and a lot less swearing and stress. With Hook2 Lowrance has it just right, and it feels very natural to use the buttons to navigate through the few and short menus. Since Hook2 is buttons-only, i.e. no touchscreen, this is quite important. While playing around with the units, I pressed the screen several times, trying to do the touch-operations I`m used to from Elite Ti and HDS, then remembering that "doh, no touch here mate" and going back to the buttons. However, after 30 minutes or so that was all sorted out in my head, and the buttons seemed natural and easy once again. With Hook I never got that feeling, the hook-units quite simply missed a couple of important buttons, making them less user-friendly then the new Hook2.

As mentioned, all Hook2-sizes are now widescreen. Hook had widescreen on 7 and 9, while 4 (that was actually 4,3) and 5 had a more vertical-friendly approach.

This also means a change in screen-resolution, which fits the new screen-orientation.
The Hook2 4 is actually 4,3" and Hook2 12 is 12,1". 5,7 and 9 are the same size in inches as the model name implies.

Inside the units, Hook2 has been boosted with faster internals then Hook. That had to be done for the units very sophisticated automatic tuning, but has also cured another problem well-know with Hook. Hooks slowish redraw speed of the chart meant that you had to zoom far out when going on plane, or the redraw would simply not keep up with the boats speed. This should not be a problem with Hook2.

At the back of the units, there has also been significant change. Gone are the loved and hated turn-knob connectors that we know from all the other Lowrance-models. Say hello to push-connectors: 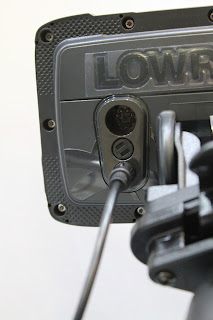 Both power and ducer now uses push-connectors. On the cheapest Hook2s those two cables are joined so there is only one connection to the unit.

There are three new ducers for the new Hook2. There are adapters available to use the older-style ducers with blue connectors on Hook2, but those adapters are more of a last-resort then a recommended solution. Unlike Hook, there is no manual ducer-selection in the menu of Hook2, so using another ducer then the three new ducers might not give optimum performance. (We are hoping to test that sometime in 2018, so watch this space if you wish to use Hook2 with another ducer then Bullet/ SplitShot/ TripleShot).

There is no 83 kHz (or medium chirp) with Hook2, while the older Hook would operate at both 83/200/medium/ high depending on what ducer it was connected with. Once again this has to do with trying to make the units easy to use. The "normal" 22 degree coneangle with ducers like HST-WSBL, TotalScan and 83/200/455/800-HDI operated at 200 kHz has been doubled to 42 degrees with Bullet/ SplitShot/ TripleShot. That is a whopping coneangle, so there is simply no need for the 83/ medium-frequency anymore.

The last difference in hardware on our list, is new brackets for Hook2 4 and 5. The new brackets CAN NOT be turned sideways like the old style brackets, so we guess the new RAM-mounts bracket will be a "must have" for many users buying Hook2 4 and 5.
To sum up the hardware, just about everything except the screen on 7 and 9 are new. Hook2 is even completely waterproof:

The software - sonar and chartplotter.

Here we see another major difference from the old Hook to the new Hook2. The old Hook was based on the same software that the older LCX (predecessor of the high-end HDS-units), and not the BSM-sonar (BSM = Broadband Sounder Module) we love in HDS and Elite Ti. Hook2 is the first low-price unit that gets BSM-based software, and that is indeed a major upgrade.

In order to make the BSM-sonar more entry-level friendly, Lowrance techs have spent a lot of time creating and adjusting algorithms for the automatic features in the Hook. The auto-sensitivity we know from other models have been significantly improved with adaptive algorithms for pulse length control as well as the normal gain-control. In sum this means less tinkering with settings, in fact most users will probably not have to tinker with settings at all.

It is worth noting that the new automatic adjustments apply to all three types of sonar; 2D, DownScan and SideScan. The idea is to make the Power-button the only button you will use most of the time.

As mentioned earlier the chartplotters redraw is a lot faster now, thanks to a faster processor, and should be fast enough even in bassboats. The chartplotter-versions (5,7,9 and 12) can use both Navionics, C-Map, C-Map Genesis and Reefmaster. When used with a Navionics-card with an active subscription, Hook2 is compatible with Navionics SonarChart Live. (A first in this pricerange.)

Hook2 has nothing more than the name in common with the previous Hook. It truly is designed from the ground and up as a new series of units and cannot be directly compared to any other Lowrance series. I feel confident that shallow-water users trading up from older Hook, Elite CHIRP and Elite HDI to Hook2 will be happy with their new units. Especially if they go to the Hook2-models with the TripleShot-ducer so they get SideScan.

Hook2 will probably be a good choice for the shallow to medium depth fisherman, while the large coneangle should make Hook2 less tempting for the guys regularly fishing deeper water.
Av Erik Grimsøen januar 05, 2018

What is the difference between Lowrance HDS and Lowrance Elite HDI

Av Erik Grimsøen september 23, 2014
Ever since the Elite 7 HDI came on the market I have recived a lot of questions regarding the difference between the HDS-range and Elite HDI. In this article I will try to list most of the differences, seen from a keen anglers point of view. This also means looking at most of what Lowrance has to offer, but I'm sticking to models sold today and models I personally would recommend. The three main model-series, plus the newcomer Elite CHIRP. HDS Gen 2 , true multi function displays (MFD) with button-operation and screensize from 5" to 10,4". HDS Gen 2 Touch , true multi function displays (MFD) with touchscreens and screensize from 7" to 12". Elite HDI , "stand alone", ie not ment for networking besides VHF and AIS. Button-operation and screensize from 4,3" to 7". Elite CHIRP , as Elite HDI but with CHIRP-sonar and faster processor in adition. Screensize 5" and 7".   HDS Gen 2 Units from this series are seen while fishing
10 kommentarer
Les mer

What is the difference between HDS Carbon and HDS Live?

What is the difference between HDS Gen 3 and HDS Carbon?

What is the difference between Lowrance HDS Gen 2 and HDS Gen 3?

Av Erik Grimsøen september 24, 2015
The cyclus in which models change have become shorter and shorter. Is there any real difference between them anymore? When I started out in this game most people would say that their sonar should stay onboard for 8-10 years before they would even consider upgrading it. Everything with less then 5 years on it was considered "new". But as with all things containing a circuit-board, development has been ever accelerating and we are now down to a two or three year cycle between model-changes. I belive that this is to the consumers advantage, but is "the new" always better then "the old"? In most cases the answer to that question is "yes", but it`s up to you to decide if that difference is big enough for you to spend your hard earned cash. Technically it is easy to spot the differences, but whether you will notice it out on the water is a more subjective mather. In this article I will try to look behind the marketing, and point to the actual diff
Legg inn en kommentar
Les mer

What is the difference between Lowrance HDS Live and Elite Ti2?

Av Erik Grimsøen desember 02, 2019
Lowrance as a brand of marine electronis is well known to all anglers, but the differences within their range of different models seem to cause quite a few questions out there. Here we will try to outline the difference between Lowrance HDS Live (top end) and Lowrance Elite Ti2 (middle range). Lowrance Elite Ti2 vs Lowrance HDS Live (photo; lowrance.com) As usual, we will start with the tech and then try to translate those technical aspects to practical differences while out on the water. Hardware - housing, screen and connections. The screen and housing on Elite Ti2 is the same as on the previous Elite Ti, and again more or less the same as on HDS Gen 2 Touch. (The memorycard-door and mounting-bracket is different from HDS Gen 2 Touch.) This is by no means new stuff, and compared to the more advanced housing and screen on HDS Live, Elite Ti2 is starting to show its relative age. However, with that in mind it is worth noting that when looking at the competition, several of
2 kommentarer
Les mer